It’s easy to feel hopeful on a beautiful day like today.
But in the end we all face difficulties.
Everyone has dark days when they feel alone, lost and buried.
And the most powerful things that helps us move forward is ahope
And we want to become a hope for those who need it most
Skip Intro
Partner stories
How we together with Microshift achieved the power of focusing on what matters most
back to blog 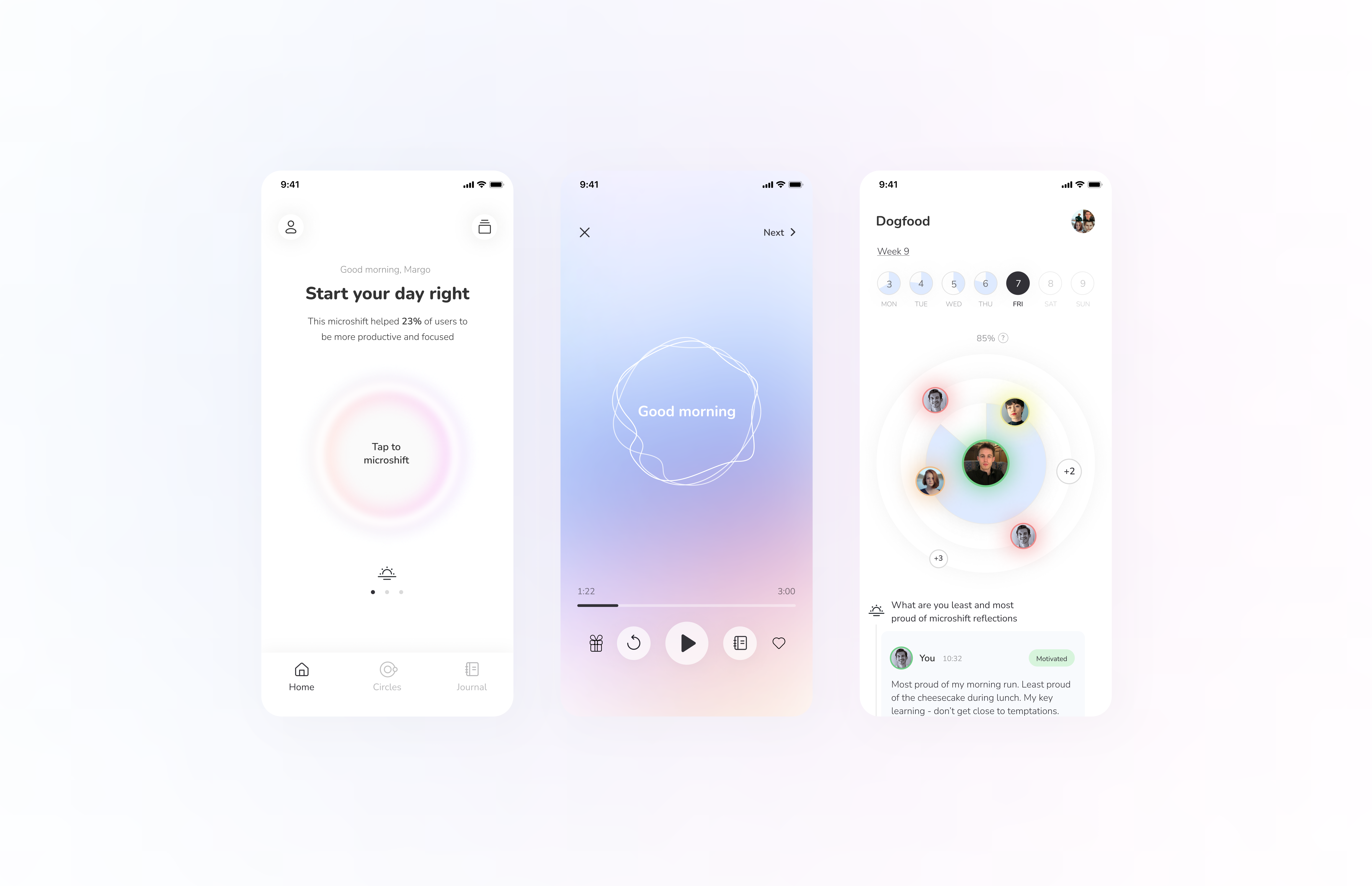 ‘Sometimes, I can’t focus on my tasks. It can even happen that I lose the meaning of activities due to the lack of focus,’ once said our friend Mike.

Eventually, like a domino effect, we struggle with daily routine, suffer from stress and cause harm to our mental health. And not to be in deep water, there arises a need to go to a psychotherapist, but their assistance in developing discipline and obtaining relaxation techniques is quite pricey.

This vicious circle can appear unbreakable, but what if you go the other way? What if you take practical concepts from psychotherapy and wittily adapt them into an application? Simplicity is the ultimate sophistication, isn’t it? We can create the same environment of people with whom we can share our emotions and produce influential meditation tracks with questions encouraging a person to remain mindful — so to speak, be present “here and now”.

It is exactly the idea we and our partner Microshift, led by Roman Jasins, have. Our CEO Max met Roman in Sweden, who at that time had a product idea with the above mentioned concept.

I was trying to do something meaningful in many ways to help people with difficult situations. But I couldn’t give free time, because it was not my main focus and not my main business. I realised that this must be a way to combine my passion.
Roman Jasins — Founder of Microshift.

In fact, the problem, which was described at the beginning of the article, could be solved in many ways. Someone can shift their mind doing yoga, meditation or getting therapy. But, many of them require time commitment. Many of them need a place to be. It is good if you meditate for 1,5 hours in the morning, but the majority of people can’t really afford: kids, work and the logistics of life don’t let you do it. Moreover, even if you can afford this, when you leave your home, start interacting with the world, you might be affected by a negative experience.

Imagine like you’re having a meeting and someone in that meeting is rude or unfair to you. You probably will go out of this meeting feeling like a victim and keep thinking about this until you find yourself stuck in these negative emotions, which we all know is unproductive.

So, what Microshift does is it teaches you how to not be stuck in your negative experiences, learn from them and realise what the next thing is in a matter of a minute.

But what’s the method behind this?

The method is quite simple. The first thing you should do is to pose and then regulate your state using well-known techniques (e.g. taking a deep breath). The next stage in the method is to emotionally connect with you and there are simple hacks for it, you can just think of someone dear to you. And what happens in that moment? You’re going to your consciousness and once you’re there, Microshift will ask you a reflective question, but doesn’t tell you what to do. We believe that the answer is within ourselves, so with the help of leading questions we encourage users to reflect. The last step is to encourage you to journal your thoughts and act on your reflections that you’ve just got.

As you see, the method is quite simple: get into your body, so you can listen to yourself; emotionally connect with you by asking the right question and record your reflections.

In case you’re curious, you can give it a try just right Here.

The importance of being connected

As Roman said, we are social creatures.

I quite enjoy solitude. I have a tendency to get melancholic sometimes. But it helps me to get into the reflected state. I don’t enjoy it, but I don’t get depressed. But if I was always alone, I would be miserable.
Roman Jasins — Founder of Microshift.

Connection is to be able to be with someone and both are given something good and positive. This is not a transaction and not an exchange, but because it happens naturally. And in return to Microshift we introduced the same concept in this app.

Concept of circles where we can choose to share our reflections. People can actually be sad and they can share it and other participants of the circle can cheer them up.

For example, bad news gets worse for the state of people or current world events force many families to be separated. In this case circles and generated content in the app can raise the mood of people, because they feel support.

The essence of the feature is to create an emotional background: we encourage people to listen to content and communicate emotions from it to each other in the digital space. People used to gather near the fire long ago, but now we can do the same, even at a distance between us.

Some people may think that sharing something personal can make you vulnerable, but who decided that it’s bad?

I think we all should be more vulnerable, because it raises trust between people. Microshift allows you to choose who and what you share. It can be a member of your team. Or maybe even a person from a circle, which you don’t know.
Roman Jasins — Founder of Microshift.

In the first stages of implementing the concept, Roman had groups on Whatsapp representing the idea behind ​​connections between people. He knew that people loved it, so we had to work together on the direction for its further evolution.

Roman already got an early validation, so our goal was to create the solution users love and need. The way to make it is to be more flexible and iterate.

Together with Roman, we had daily meetings to develop the product through joint efforts and simultaneously test it. Well, according to all the laws of an agile development methodology, we flexibly adapted users’ feedback and, through daily communication, did not do extra work by immediately changing direction if necessary. The discovery phase lasted only 2 weeks. During these 2 weeks we worked through the concept, created UX and Art Direction for the first version of the app and started tests and the development.

The cornerstone that made the experience a fit for the market was UX, UI. As the application is aimed at entrepreneurs, we wanted to make it realistic and natural. Our goal was to make the experience as smooth as possible, and the minimalistic interface was the best choice.

One of the most fascinating and driving moments is that we practiced Microshift together: we “shifted on the call” and then shared our feelings.
At such moments, you realise that the true essence of partnership and cooperation is revealed, and the strict limits between the two companies involved are eased.

We did a joint project and worked as a well-knit team: we shifted on the call, listened and performed it, and then shared our feelings.

It helped us to get closer. We worked as a cohesive unit; we joked a lot during the calls, the atmosphere was very comfortable, and everyone was quite open.
Alexey Zverugo — PM of Nozomi.

I’ve been working on different models. For example, almost 100 employees where you have to organize yourself, delegate and see differently on things. In this case you should have a lot of advancing planes. Because sometimes people don’t know how to build things and so on.

About product studio formats: the hard thing is foreseeing (in the distance) a good team and people for product building. Our partnership was good: I appreciate engineering, quality of design and product user side.
Roman Jasins — Founder of Microshift.

What about current and future plans?

Right now Microshift is growing organically and planning to receive the next round for growth. They have a lot of cool plans like AI super coaches and super therapists to talk to you when you are shifting and reflect. But as many startups have difficulties with receiving the investments right now, lots of things are on pause due to current events in the world. However this will force us to get leaner, which is a good thing, to think out of the box. And if you have a strong vision and do something meaningful, it will bring you where you want.

It was our pleasure to cooperate with Microshift and create a product that has positively influenced and will continue to do so for a huge number of people in the future. This product is a lifesaver for many people in a world of constant stress and events that we sometimes cannot control. Would you ever assume that with just a few taps on their phone, people can share their experiences with others and get a dose of mental therapy and emotional support? Well, now you know it is possible.

If you want to familiarize yourself with the application, then follow the link Here.

Nozomi life
5 min read
Wrapping up Nozomi Q3/2022
Hey everyone, Max is on the line. I hope everyone is having an amazing day. As for me personally, I traveled a lot, talked with amazing people, and hopefully managed to know this world a little bit better.
Dive into 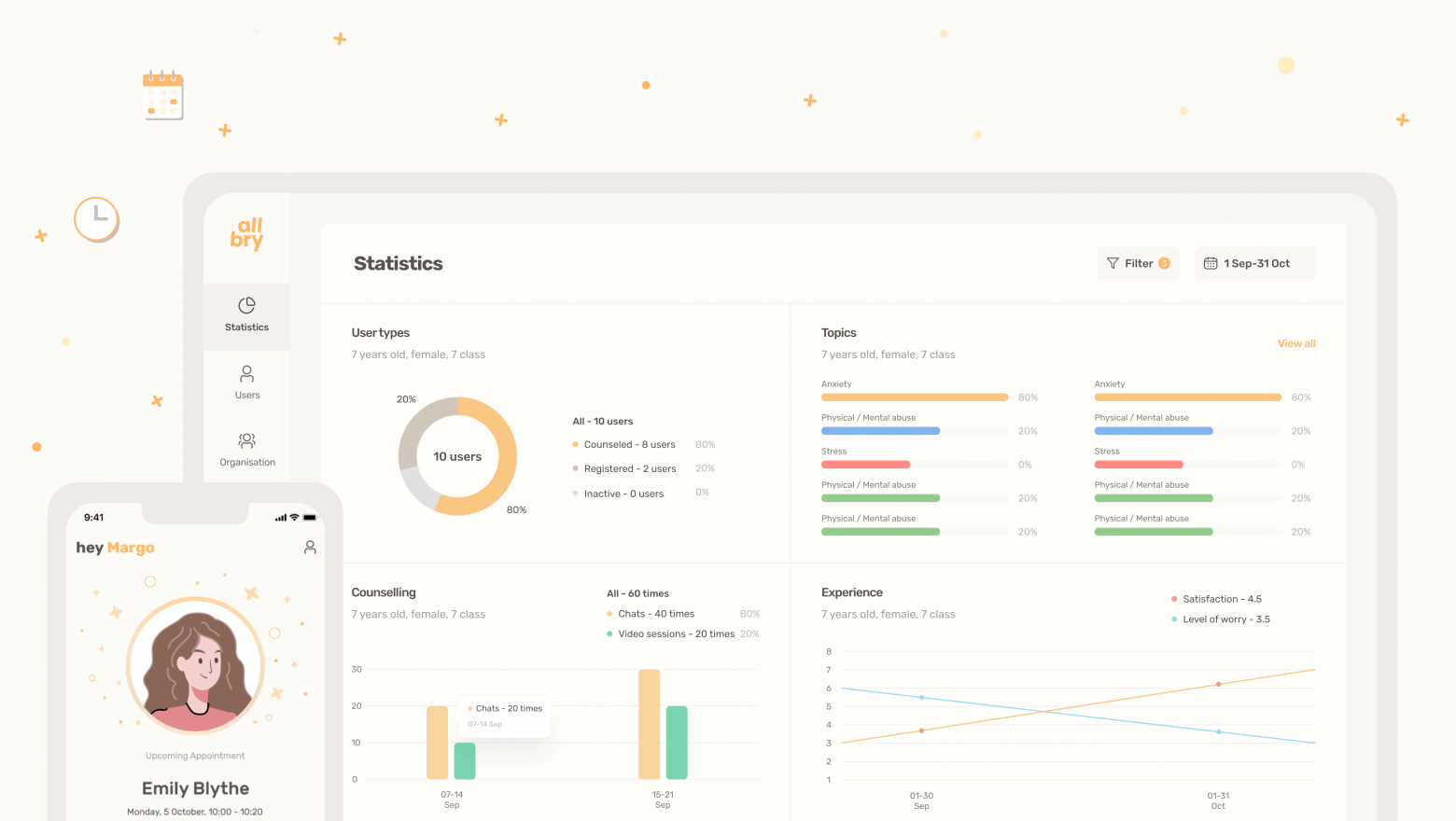 Partner stories
7 min read
How we helped Allbry improve mental wellbeing of 10,000 students in Sweden
The story about how we teamed up with Allbry to create the platform which makes students' mental care accessible
Dive into
Link copied to clipboard